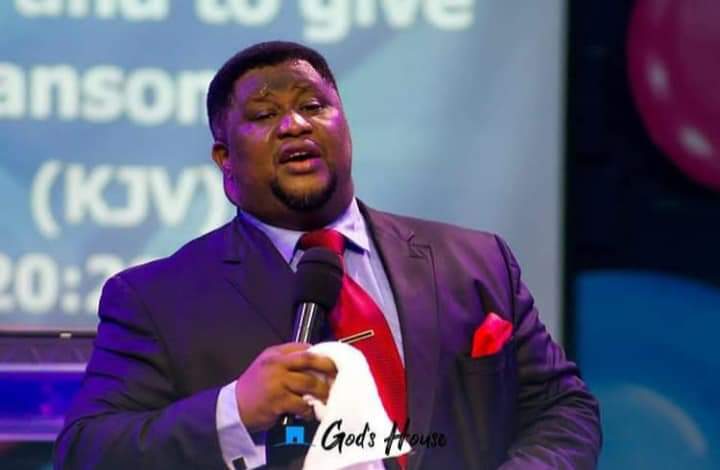 During one of his ministrations at God’s House of Refuge, Uyo, Pastor Ezekiel Atang shared his story of trying times and how he now has a dislike for Okro soup because that was the easiest soup they could afford during those times in his marriage.

Pastor Ezekiel Atang is the Lead Pastor, God’s House of Refuge with its head quarters in Uyo, Akwa Ibom State, having other branches within the state, in Cross River State, Nigeria, and in the United States of America.

He was born on the 14th of March 1972 and studied Marketing at the University of Calabar.

Ezekiel Atang has always had a passion for Christ and ministry and this was very evident even during his secondary school days as a teenager in the 1980s. He would go from class to class preaching Christ.

He recalled a certain time when he was banned from preaching the Word of God in his school and when he persisted, he was asked to leave the school boarding facility not minding that his family lived in a different city from where his school was located.

Due to the suspension from the boarding house, he had to live in a rickety and secluded room in a place distant from school. There was no security and one could see through the outside because the door wasn’t well fitted at the ground level.

His mum came to visit him at his new rickety apartment, saw the condition he was living in and burst into tears. He felt bad, it was when she left and he knelt to pray that he heard God’s voice clearly about his ministry path.

Ezekiel Atang continued preaching the Word of God through out his school days and during undergraduate studies, he began partnering both ministry and school.

He served as a choir leader in the church, Revelation Ministries, Calabar, under the leadership of Pastor Rex Fubara Manuel, where he later met and married his Wife, Pastor Dara Atang who was a choir member. He also met his spiritual brother, Pastor Ntia. I. Ntia at Revelation Ministries as they both served there.

Ezekiel and Dara Atang’s early marital days were faced with different challenges both financial and conceptual issues. Pastor Ezekiel Atang and wife often share their conception story and how they believed God for a child the first three years of their marriage without evidence.

They chose to believe God than the doctors report and God came through for them after Pastor Ezekiel Atang and wife received their unique encounters from God at varying times and a word from God concerning the situation. This inspired his book “Working Your Way Out of Childlessness”.

Today, the couple are thriving. Pastor Ezekiel Atang leads the Church, God’s House of Refuge with over 1,500 membership strength and holds one of the biggest and talked about gospel gathering of youths called ‘Singles Frank Talk’ with over 2000 attendance every month in the city of Uyo, Akwa Ibom State.

He is popularly called ‘The Frank Talker’. He addresses topics on relationship and marriage at this monthly gathering where he uncovers God’s designed path for singles concerning singlehood and journey to their marital destiny.

Ezekiel Atang has authored over 20 books and counting, some which are: The Finding Process, Being a Christian in Your Marriage, Overcoming Tough Time in Marriage, Winning Battles Behind Closed Doors, Communication Without Contention, Handling a Difficult Spouse, Sex and Destiny, among many others.

Today, he is not just successful in ministry but a successful father of three lovely children and a loving husband to his wife, Dara Atang.

He also uses the ministry God has placed in his hands to counsel married people, having counselled many through the program ‘Fresh Wine for Couples’.

Bishop David Abioye Everything in life is limited to money because money answereth all things.Gospel can not spread without...
Read more
Events

HE THAT EATS WITH THE WISE SHALL BE WISE😂

Find a mentor and a friend. Go out together. Relax, refresh and refire. Walk with the wise and...
Read more

FROM BEING A SECULAR ARTISTE TO A GOSPEL ARTISTE

WINNING WEDNESDAYChidinma Ekile "The devil cannot create! He has to use what is already created,...
Read more
Winning Wesnesday

Pastor Enoch Adejare Adeboye How we took the Gospel all over. The...
Read more
Winning Wesnesday

HOW GOD RESCUED ME FROM THE SPIRIT OF LUST.Apostle Mike Orokpo I thought it was...
Read more
Winning Wesnesday

I SOLD SPARE PARTS, CHEMICALS AND WOOD BEFORE MY CALLING