SEPTEMBER 17 IN THE LIFE OF A PASTOR AND A BISHOP: DAVID OYEDEPO’S DATE WITH DESTINY 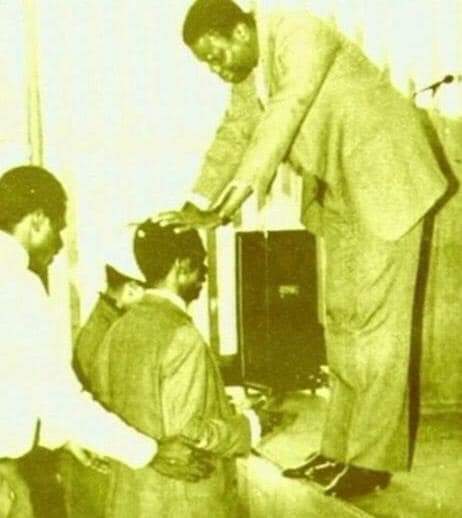 Exactly 38 years ago today, on September 17th 1983, 29 year old Brother David Oyedepo and his 24 year old wife, Faith Abiola Oyedepo were ordained as Pastors of a new church organization, the Living Faith Church World Outreach Centre in Ilorin, Kwara State by Pastor Enoch Adejare Adeboye.
There was nothing extraordinary about this very young couple ordained by this 41 year old University of Ilorin lecturer and relatively new General Overseer of a struggling 31 year old Church (Redeemed Christian Church of God).
He was or seemed to be a short man with very tall dreams. The dreams also seemed to be inconsequential and the only memory of it was what had been documented in an exercise book by one Brother Joseph Ebhohimen, the Secretary at a Prayer Camp Meeting in a Secondary School at Erinle in the same Kwara State where the about 70 young attendees who claimed to be on a quest to ‘liberate the world from oppression’ called themselves ‘Power House’ and ate with plastic spoons and plates.
Taking us back to the ordination, the gentle lecturer and preacher who gave the sermon, Pastor Enoch Adeboye gave a prophecy and then a warning to the newly ordained Pastor, Oyedepo ‘This Ministry shall be great’. He then added that Pastor Oyedepo should never forget the story of Jesus and the Colt during the advent into Jerusalem noting that the Colt was only relevant when Jesus was on its back and the moment Jesus went off its back it was never heard off again. This ministry will only remain relevant and the Pastor would only be relevant as long as Jesus was the one riding it.
The Ministry launched out that day and resumed in an office the next week with a rent of N100 (about $100) as at then per annum.

Some 5 years later, Archbishop Benson Andrew Idahosa was there in Kaduna, to consecrate Pastor Oyedepo to the office of Bishop. Many of the testimonies on this Ministry have subsequently happened in the month of September, if not on the 17th September. Subsequently, and up until 1999, the Ministry continued to celebrate the anniversary of the Church and ordinance into ministry until the decision to identify with the date the liberation mandate of 1st and 2nd May 1981 was given and consequently the instruction in the Church’s Red Book ‘Mandate ‘ de-emphasizing Church anniversaries.

With benefit of hindsight, it is apparent that the prophecies upon the Ministry given to Bishop David Oyedepo at the Power House as well as at the September 17 Pastoral Ordination and Bishopric Consecration have mostly taken place with more being revealed daily to God’s Servant.
As we celebrate God for what today signifies in the life of His Servant, may we all locate our own places in destiny early and work it out by divine guidance….on time.
May we not disappoint destiny!

THE BRIDGE BETWEEN PROPHECY AND EXPERIENCE IS LIGHT AND UNDERSTANDING. ANY DIMENSION OF SPIRITUAL TRUTHS...
Read more
Events

TAKE RESPONSIBILITY FOR BUILDING YOUR FAITH, FAITH DOES NOT GROW BY WISHING. IT GROWS BY EXCERCISNG YOURSELF IN THE WORD OF GOD.

UNTIL YOU ARE FEEDING FAT FROM THE WORD, YOU WILL NEVER BE STRONG IN FAITH. IF YOU ARE...
Read more
Events

ANY FAITH THAT HOLDS GOD ABSOLUTELY RESPONSIBLE IS AN IRRESPONSIBLE FAITH.

THE QUALITY OF OUR LIVES IS A FUNCTION OF OUR FAITH. SO THE EARLIER WE TAKE RESPONSIBILITY TO...
Read more

YOU HAVE A SHARE!Few years ago while teaching in one of the campuses of the Dunamis School of...
Read more
Features